The theme of Dr Voon Ong’s talk at SRUK’s Cambridge Conference in July was clinical trials in the field of emerging therapies, providing an overview of the latest news from recently completed clinical studies and of ongoing studies that show significant promise.

The theme of Dr Voon Ong's talk at SRUK's Cambridge Conference in July was clinical trials in the field of emerging therapies, providing an overview of the latest news from recently completed clinical studies and of ongoing studies that show significant promise.

When discussing clinical trials, it is important to be aware of the major outcome measures that are utilised to assess the efficacy of a drug. In the context of a therapeutic trial associated with systemic sclerosis (SSc) aimed at the skin, one of the key outcome measures is the validated modified Rodnan skin score (mRSS). This assesses skin thickness across 17 defined points on the body on a scale of 0 (indicating unaffected skin) to 3, indicating severe thickness; the benefit of this outcome measure is that it is sensitive to change, allowing physicians to evaluate if there has been worsening or improvement. It is generally accepted that skin thickness tends to increase in early diffuse cutaneous SSc (dcSSc) and decrease in late dcSSc, and the time of peak involvement is typically 12-18 months after the onset of skin thickening.

One recently completed Phase 2 trial that Dr Ong made mention of was the Abatacept Systemic SclErosis Trial (ASSET). Abatacept is a biologic agent used chiefly for rheumatoid arthritis, but in this trial, the impact on skin was used as the primary outcome. In this randomised controlled trial (RCT), where one group received a weekly injection of abatacept and the other a placebo, the primary outcome measure was any change in mRSS over 48 weeks. It was demonstrated that abatacept is well tolerated in early dcSSc, and there was a global trend in skin improvement in both treatment groups. The scores were not statistically significant however, as the changes in mRSS scores at months 1, 3, 6 or 9 were not dramatic enough, and there was not a large enough difference between the mRSS scores of the group receiving the placebo or the group receiving abatacept. Despite the primary measure endpoint not being significant, there were clinically meaningful results in terms of the Health Assessment Questionnaire-Disease Index, which is a measure of function and disease status; this is important as the changes relate to how a patient feels, functions and survives.

The first phase 3 trial in SSc has also been completed recently. This was the FocuSSced trial, where Tocilizumab (TCZ) was compared with a placebo over the course of 1 year, following on from encouraging Phase 2 data from the FaSScinate trial. 210 people have signed up globally to the FocuSSced trial, 7 of which are from the Royal Free hospital. TCZ is an immunosuppressive drug, predominantly used for the treatment of rheumatoid arthritis and juvenile idiopathic arthritis; it works by preventing the attached of a molecule called IL6 to its receptor, IL6R. IL6 has a role in promoting fibrosis, and has been shown to be elevated in the serum of people with active skin involvement with SSc, with suggestions that it is a biomarker for poor prognosis. The primary endpoint was a change in mRSS at baseline compared to week 48. There was a strong trend for benefit in terms of mRSS at week 48 but they did not meet the primary endpoint change; it is key to note however that a numerically larger improvement in mRSS was observed in the group administered with TCZ compared to placebo. The results also implied that TCZ may help in preventing the decline of lung function, as fewer patients in the group receiving TCZ showed worsening of lung function compared to the group receiving placebo. This adds weight to the investigators' hypothesis that IL6 may be an important mediator in the context of SSc.

Dr Ong also referred to a range of ongoing Phase II and III SSc trials, including ones concerning Lenabasum (results available in 2020), Anti-IL4/13 (results available in 2019), Rituximab and prednisolone. The RECITAL trial is a randomised, double-blind controlled trial, where Rituximab was compared to cyclophosphamide in connective tissue disease-associated ILD, as an initial therapy. Rituximab is often used in rheumatoid arthritis, lupus and myositis. It has been shown to be effective in SSc associated ILD, and it is fairly widely used for this in some European countries. The RECITAL study is being led by Professor Toby Maher at the Royal Brompton Hospital, and enrolled patients will receive, over the course of 6 months, either two infusions of rituximab a month or cyclophosphamide once a month. The primary endpoint is an absolute change in full vital lung capacity at 24 weeks. The trial is still in the recruitment stage.

Another ongoing study is for oral prednisolone in early dcSSc – the PRedSS trial. This is a non-commercial phase II randomized, double-blind, placebo-controlled, multi-centre study led by Professor Herrick, and it aims to determine if: the moderate dose prednisolone is effective in reducing pain, disability and skin thickening in patients with early dcSSc, and if moderate dose prednisolone is a safe therapy in patients with dcSSc, especially in regards to the kidneys. If the answer is yes to both lines of questioning, then prednisolone therapy will be much more widely prescribed for this patient group. Although it is very possible that prednisolone can help relieve the severe pain, itching, and disability (due to contractures and musculoskeletal involvement) of early diffuse scleroderma, doctors are often reluctant to prescribe prednisolone because of possible side effects, particularly an increased risk of serious kidney problems.

Dr Ong emphasised in his talk that the development of safe and effective drugs requires a team effort and meticulous planning; researchers and international collaboration allow expertise to be drawn from the SSc field and enable the recruitment numbers to be met for a disease as rare as SSc, as well as support from pharmaceutical industries and from the community to prioritise clinical drug development. Key regulatory authorities such as the Food and Drug Administration (FDA) in the USA and European Medicines Agency (EMA) are in charge of evaluation and supervision of medicinal products. There are benefits to each of the above mentioned groups.

Watch the full presentation below: 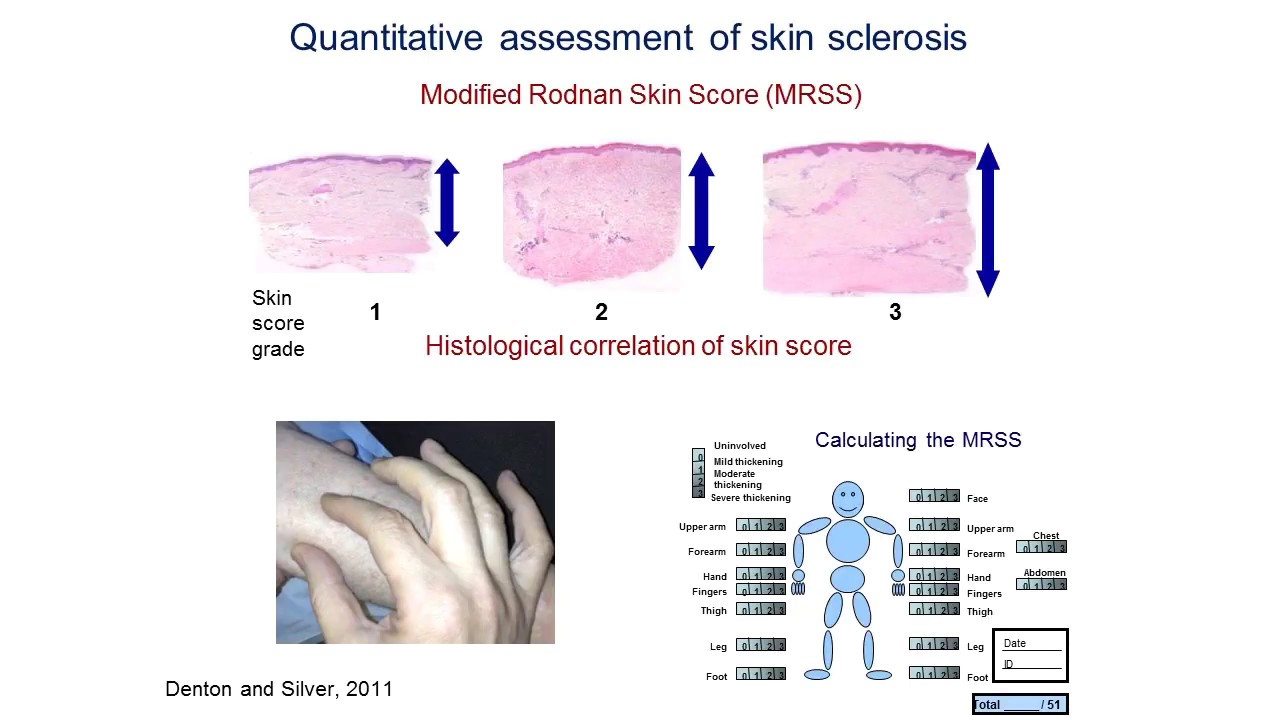 It is evident that the SSc clinical landscape is changing, as there have been improvements in survival rates. The impact of unmet medical needs is still substantial however, as severe SSc continues to have unacceptable mortality rate and immunosuppression for skin and lung involvement only shows modest benefits. Although SSc remains a major clinical and research challenge, there are several reasons to be optimistic about future progress in the coming years, as effective treatments are within reach, especially for organ-based complications such as the lung.

If you are interested in helping SRUK to fund work like this, then please visit our donations page here. We rely on the generosity of our community to continue to support groundbreaking research in both scleroderma and Raynaud's.

If you would like information on scleroderma in different parts of your body, please visit: Scleroderma and your body

Information on another new piece of research on scleroderma can be found here: Physiotherapy: why, what, how?

Evusheld is an antibody treatment designed to prevent patients from contracting COVID-19, and can provide protection for immunocompromised and immunosuppressed people that haven’t mounted a proper response to the vaccine. SRUK is supporting the call for the UK Government to procure and provide Evusheld to patients in the UK. Find out about how you can help on this page.

Six Months of STAR – the Symptom Tracking App for Raynaud’s

July marks six months since Scleroderma & Raynaud’s UK launched STAR, the Symptom Tracking App for Raynaud’s, which enables members of the SRUK community to track their Raynaud's attacks and directly contribute to essential scientific research into the condition. Here’s a breakdown of what we’ve learnt so far, thanks to the STAR community!