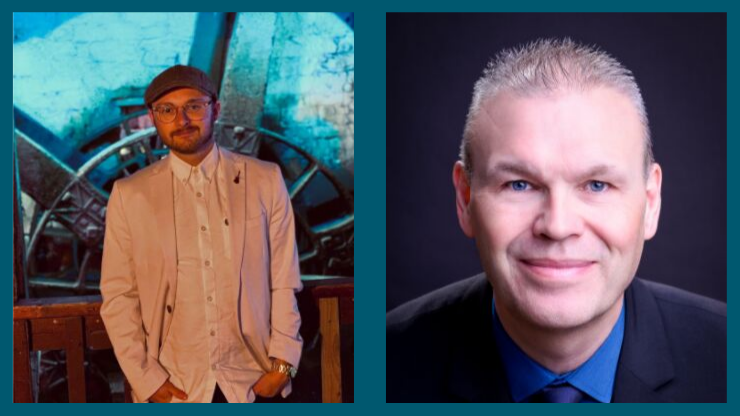 As a charity, our community of fundraisers are crucial to the work that we do. They help us raise awareness, educate people about the reality of Scleroderma and Raynaud's phenomenon and raise money for SRUK to channel into research and awareness projects. In this issue, we are shining a spotlight on two fundraisers who are particularly passionate about the importance of early detection.

Thomas Jones, 28, mother Karen had systemic scleroderma and Raynaud's phenomenon and, after a string of related illnesses, she ultimately lost her fight with the condition last year. Following a lengthy diagnostic process, Karen was diagnosed in 1999. However, she had been unwell for a while before she finally received a full diagnosis.

During Karen's lifetime she took part in every available medical study and gave interviews on the condition to raise public awareness. Following in her footsteps, Thomas has arranged an evening of show stopping entertainment featuring his own band Quaintest Show on Earth at the stunning Old Courts Theatre in Wigan to raise awareness of the condition. He is also aiming to raise £500 for SRUK and in the name of his mum.

“It's a very nasty disease and it doesn't get much attention because it affects less people, but it's just as important to know about. It took a while for my mum to get a diagnosis.

“We met a lot very confused people. She just kept going higher up the chain until someone was able to give her a diagnosis.

“It's really important for people in the medical community to know more about it, especially for people who take blood from patients with sensitive skin.

“Even if we can make it another thing for doctors to look out for, it would make a difference. There's no reason why it shouldn't be in the public consciousness and I hope to see more people talking about it."

In the future, Thomas plans to host a fundraiser every June to commemorate his mum, and to shine a spotlight on the condition during Scleroderma Awareness Month.

In the weeks before her death, Lauren was due to see a rheumatologist but she had repeatedly visited her physician in an effort to get to the bottom of her health problems. Unfortunately, Lauren was not diagnosed with scleroderma until she was in intensive care after developing acute renal crisis.

“Doctors initially thought it was fibromyalgia and didn't investigate deeply enough. It's not really the doctor's fault as they can only go on what they can see, but to me they didn't move fast enough.

“We need to be getting people to relevant consultants as soon as possible, especially as Lauren had been back multiple times due to the aching, massive fatigue and pain.

“They just kept giving her different medications for the fibromyalgia. If they'd have got her into the rheumatologist at Christmas, and she died at Easter, they may well have found it and got on top of it and she may well be here today."

As we learn more about both conditions, Philip hopes to see more people diagnosed earlier so that patients get the help they need when they need it most.

“There should to be extra training for doctors and more information sharing so we can get people diagnosed earlier. Hopefully the new scleroderma booklet will help a lot.

“There should to be extra training for doctors and more information sharing so we can get people diagnosed earlier. Hopefully the new scleroderma booklet will help a lot.

“It would be great if we had more specialist units in the country too. Having only one isolated hospital is just not enough. Further training in the subject for clinicians would make a huge difference. Even if the specialists don't know and have to ask other experts, then it delays treatment."

If you would like to help us make a difference to the lives of people living with Scleroderma and Raynaud's phenomenon, then please reach out anytime, we'd love to have you!