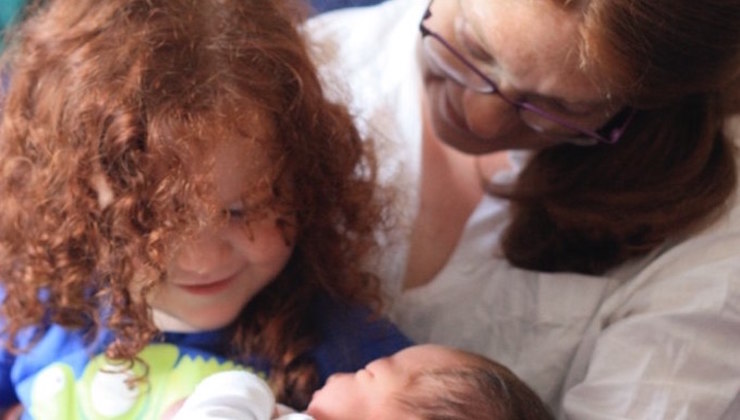 "The summer my first daughter was born was not particularly warm, and towards the end of August there was a noticeable drop in temperature. Living in a poorly-insulated Victorian house meant that we really felt the cold coming in. Still, when I started to have pain while feeding my baby, I didn't understand what it was.

I'd had a few little blips with trying to establish breastfeeding but we had settled into it well by this point. I had started to express some milk in the evenings so my husband could do the final feed of the day (and I could get an early night!).

One evening, I felt uncomfortable when I took away the breast pump and I noticed that my nipples were dark purple. I dismissed this as engorgement due to the suction of the pumps. Over the next few days, I frequently felt pain shortly after feeding my daughter or expressing. It felt like very intense spasms in the tips of my nipples and when I thought to look at them, I noticed that they were white. Sometimes I also experienced pain as my baby latched on and this was incredibly difficult as I didn't want to upset her by reacting to it. I remember telling my husband about the colour changes, but it didn't occur to me what they meant. All I knew through the general new-parent fog was that it hurt badly enough that sometimes I couldn't help shouting with pain."

“Wind back the clock a few years and I was still a doctor, working as a Senior House Officer in Clinical Immunology. Part of my job involved working in a multi—disciplinary medical clinic, seeing rheumatology patients. I saw patients with a wide variety of autoimmune diseases, which most doctors only ever see in textbooks. I learnt an enormous amount, both from the senior doctors and from the patients, but I never discussed breastfeeding with any of my patients. I certainly never thought to ask them about whether those who had Raynaud's had experienced any problems with breastfeeding and no one ever mentioned it to me. It's not something we learnt about at medical school."

The search for a diagnosis

“Back in the summer my daughter was born, I went to see the health visitors. They thought it could be thrush so advised me to see the GP for some anti-fungal treatment. I saw a rather inexperienced GP who told me that pain on breastfeeding was either mastitis or thrush and it wasn't mastitis so it had to be thrush! Anti-fungal treatment didn't help so I returned to the health visitors and then the GP.

I insisted on seeing a more experienced GP, which was a very fortunate decision. He said he had only come across this once before and this patient had been treated repeatedly for thrush for several months before losing patience and searching the internet for answers. She self-diagnosed Raynaud's and within a few days of starting treatment (14 days of a heart drug called nifedipine) she was pain-free. The GP said that he would prescribe me some nifedipine if, after looking into it myself, I thought this was a reasonable diagnosis.

I found nothing useful on Google Scholar, but discovered a great website called Kellymom which had some really good articles on nipple blanching. Finally it all fell into place: cold-induced spasmodic pain of an exposed extremity associated with triphasic colour changes can only add up to Raynaud's. I knew I'd had it in my hands and feet for years, although I never had it formally diagnosed, but it never occurred to me that it could happen in the nipples. Apparently, the story of recurrent treatment for thrush for months on end is a common one."

“Since then, I have spoken to many women who have experienced pain due to breastfeeding, several of whom gave up breastfeeding rather than enduring months of pain. I have made a point of mentioning Raynaud's at any opportunity, since it is common but easily missed.

We moved house when our first daughter was four months old and so for my second pregnancy, we saw different midwives and we changed our GP surgery. Whenever I was asked about my past medical and obstetric history, I mentioned that I have Raynaud's and that it complicated breastfeeding my first baby. Almost every time I mentioned it, they said that they didn't know that this could happen, so I have made a point of spreading awareness, especially when there were students present.

That summer was much warmer than the one we had when my first child was born, and my second daughter was born in early June. I kept waiting for autumn to arrive properly, but we had an exceptionally warm year and I was very careful to wrap up properly in the cold, so I didn't start to experience symptoms until November.

While the nifedipine did the trick the first time I tried it, after that I experienced some side effects which meant that I didn't complete the full fortnight of treatment. When I first started to notice the pain and colour changes in my nipples, I requested some nifedipine from the GP, which resulted in a long conversation about Raynaud's as he had no idea that it could affect breastfeeding. He thanked me for educating him at the end of the consultation, but I have to admit that I am growing a little tired of educating people one at a time.

I believe that many women must have undiagnosed Raynaud's of the nipple, which is either mistreated as recurrent thrush or causing them to give up breastfeeding. Raynaud's is common, especially in women, so it is strange that so few people involved in caring for newborn babies and their mothers seem to have come across it.

It is important that women with Raynaud's know it could affect breastfeeding, but I would like to raise awareness among GPs and health visitors too, so that when women seek help with pain due to breastfeeding, this should be something which is considered.

It never occurred to me that I would one day be discussing my nipples in public, much less talking about their colour-changing tendencies, but if doing this will raise awareness of a very painful but easily-fixed problem, then I will put my modesty aside and tell everyone I can about my patriotic red-white-and-blue nipples!"

A collection of our informative factsheets on Raynaud's

Keep up to date with all our news and events