Muditha's presentation covers the following topics. The questions and answers can be found below.

Part one
What is Raynaud's phenomenon?
Who can get Raynaud's?
What are the different types of Raynaud's?
Diagnosis
Self-help 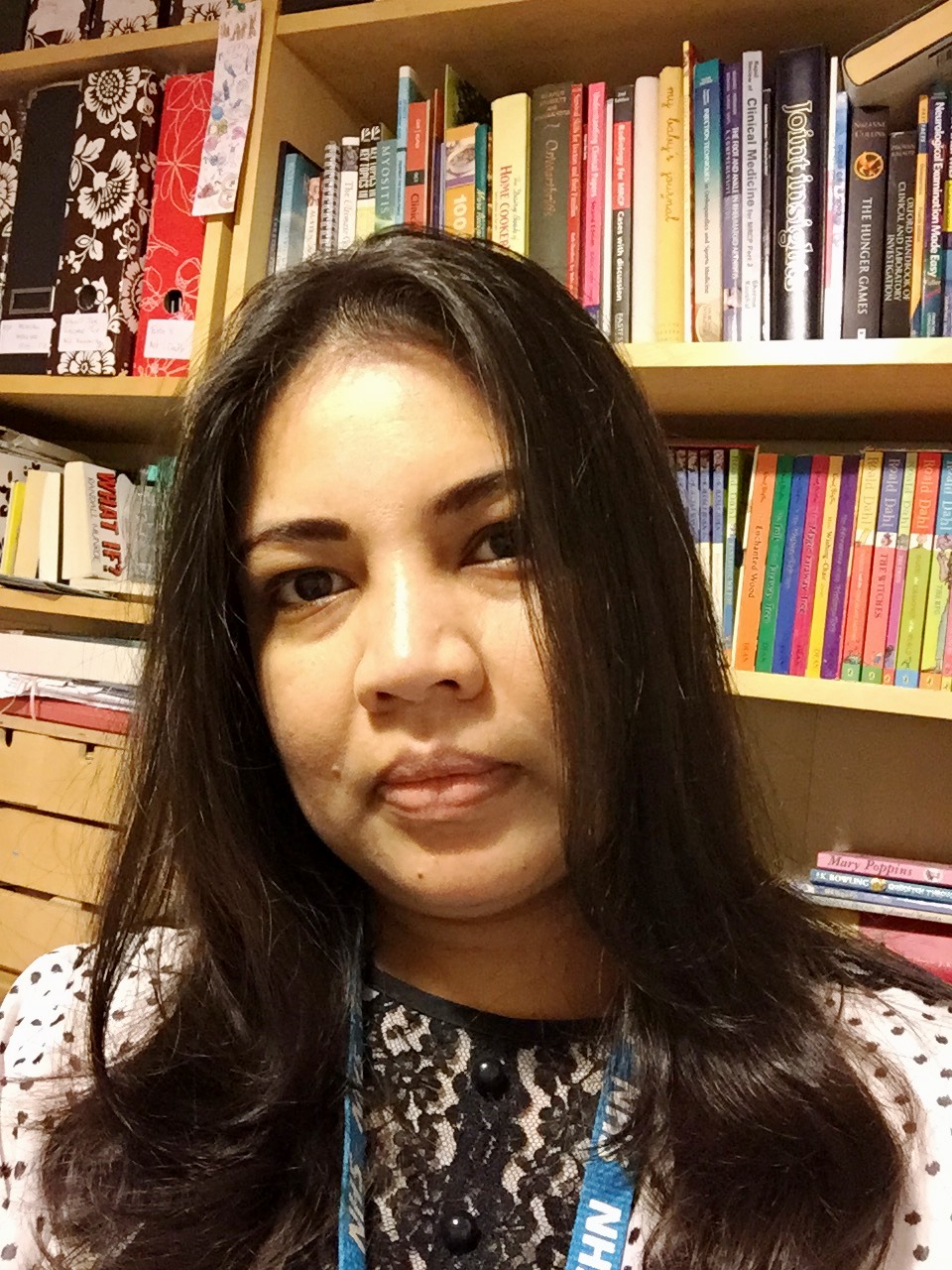 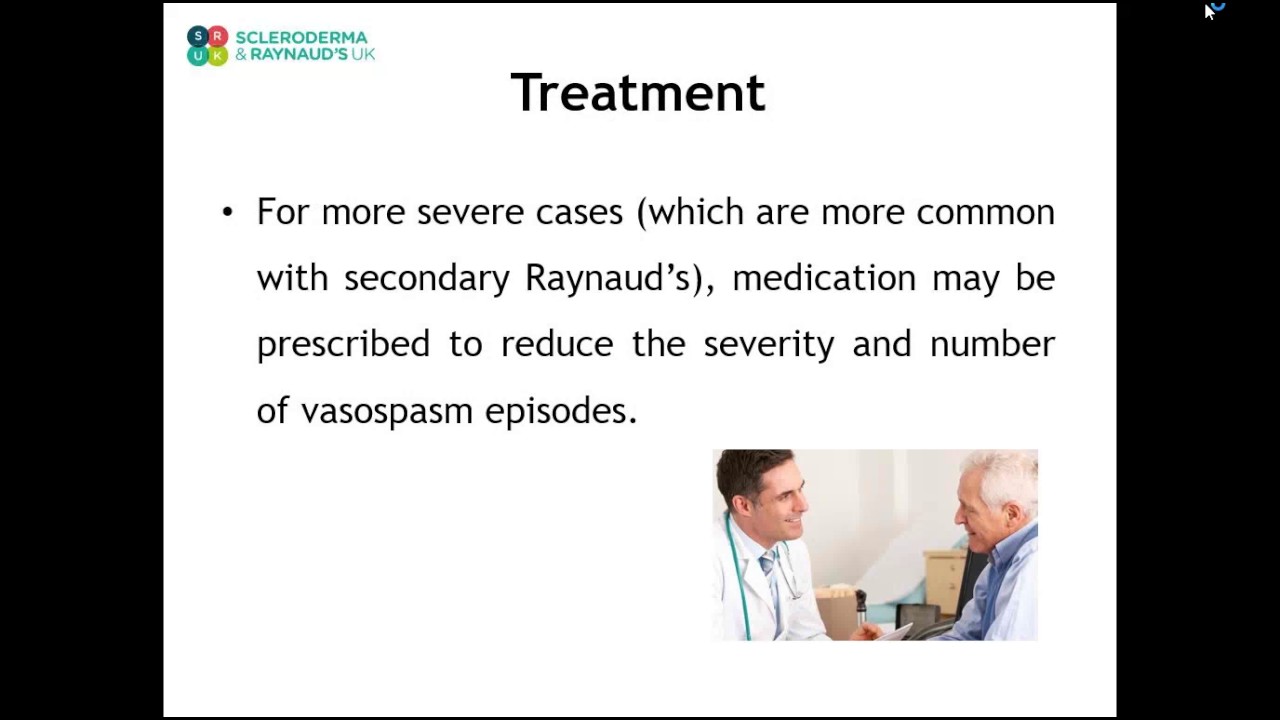 What else does Raynaud's affect?
Raynaud's can also affect your feet, nose, ears or nipples.

What causes Raynaud's?
Experts are still trying to find a root cause for this condition, but some have suggested it may be linked to alterations in the chemicals which narrow blood vessels, or an increased sensitivity in the nerve endings of blood vessel walls.

What are the main symptoms of Raynaud's and can this be identified without being mistaken for any other disease?
Typically, the affected area (fingers and toes) turns white, then blue, then bright red over the course of the attack. There may be associated tingling, swelling, or painful throbbing. The attacks may last from minutes to hours.

There are Raynaud's mimics. Many of these conditions may co-exist as well. Some will have a symptom complex which is usually fairly distinctive, but other causes of vascular compromise may cause similar symptoms. You may need further investigations. So seek medical advice if you have any further queries.

What percentage of the population get this disease?
Thanks for your question. Approximately 15% of the UK population are affected by Raynaud's, which is equal to one-in-six of us. At present, there are an estimated 10 million people in the UK living with this condition.


I like to create a list of questions in advance to help me make the most of my time with my specialist. What questions shall I ask?
Some questions to ask your doctor include:

Do not hesitate to ask other questions. as well.

Is it hereditary?
Researchers haven't determined a specific genetic link for Raynaud's, although in many families, more than one member has the condition. Usually, however, it is the more benign “primary Raynaud's." As a true genetic factor has not been clinically proven, it is uncertain as to whether or not family connections are based on increased awareness of the condition among relatives or true heredity.

If Raynaud's is so common, how come I've never heard of it?
For many people, symptoms are mild and not particularly troublesome. They may think they are merely “cold-sensitive" or have “poor circulation." These individuals often don't seek medical attention, or may not consider it noteworthy to mention to their physicians. Often, people with Raynaud's symptoms don't report any symptoms until they experience painful attacks, or develop fingertip sores or ulcerations that don't heal after weeks or even months.

How do I know whether I have primary or secondary Raynaud's?
The form is determined by a careful examination from your physician, who looks for signs of an underlying disease (for example, thickened skin in scleroderma, or sun-sensitive skin rashes in lupus). A blood test known as the ANA (antinuclear antibody test) is usually done. If the workup is negative for symptoms of other diseases, and the ANA is also negative, it is likely that the Raynaud's is primary. However, it may take years for other disease signs to develop, so your physician may want to follow you for a few years before assuring you that nothing else is likely to happen. A positive ANA is only a marker for the presence of an underlying connective tissue disease. However, some people have a positive ANA for many years, but never develop any symptoms of scleroderma, lupus or any other rheumatic disease. These individuals probably would be assumed to have primary Raynaud's. In most of these cases, the patient is said to have an “undifferentiated connective tissue disease." Other than watching the patient closely for signs of another disorder, the treatment is virtually the same as for primary Raynaud's. As common as Raynaud's is in the general population, fortunately only a small percentage of people with Raynaud's are classified as having secondary Raynaud's.

Where did the name Raynaud's come from?
Dr. Maurice Raynaud was a French physician who published a report in 1862 of a young woman whose fingertips changed colour when she was cold or under stress. He is credited with the discovery of the condition.

I have been diagnosed with primary Raynaud's. Could I develop secondary Raynaud's?
It's possible. Sometimes the onset of Raynaud's occurs months or years before a secondary, connective tissue disease presents itself. That's why it's important to have regular medical checkups. Again, the likelihood that Raynaud's symptoms indicate a serious disease is low.

I have bad reactions to cold temperatures, but my symptoms don't sound like Raynaud's. What could they mean?
A condition known as chilblains results from defective blood circulation when the person is exposed to cold. The symptoms are swelling, inflammation, severe itching and a burning sensation. After the skin becomes itchy, it might turn red and swollen, then become tender to the touch. Cold urticaria or physical urticaria is a condition in which red allergic skin lesions and itching are produced by exposure to cold temperatures, water or mild trauma. As with Raynaud's, seek a diagnosis and treatment from your physician. One condition with symptoms and triggers (cold and stress) very similar to Raynaud's is called Acrocyanosis – a chronic circulatory disorder resulting from spasms of the small arteries of the skin. The skin goes through colour changes from the lack of oxygen to the fingers or toes similar to the discoloration seen in people who have Raynaud's. Other symptoms are severe sweating and swelling of the digits. As with Raynaud's, seek a diagnosis and treatment from your physician if you suspect any of the above conditions might apply to you.

How does biofeedback for Raynaud's work?
Biofeedback is a technique whereby individuals train themselves to increase the blood supply to their extremities. Often, a wire is taped to the fingers. This is attached to a gauge or computer that indicates whether the finger temperature is going up or down. The person is then asked to imagine he or she is in a warm room, at the beach, etc. Relaxation tapes may be used. With practice, the person can learn to raise his or her finger (and overall body) temperature. After a while, the response becomes automatic. This technique appears to work better for people with primary Raynaud's than the secondary form.

Will it help if I move to a warmer climate?
Bitterly cold winters make life miserable for many people living with Raynaud's, but warmer climates also present challenges. Attacks can occur in air-conditioned spaces or when it's a breezy day. Take into consideration the degree of control you'll have over your environment during the day (i.e. in an office or retail store for work). In the end, look at the full relocation opportunity from a lifestyle/family perspective and think through the environmental elements that you'll be dealing with at home, at work, and other venues.

Why do stress and emotional factors trigger Raynaud's episodes?
Blood vessels are normally constricted when someone experiences strong emotions. People who have Raynaud's have overactive vessels that become too narrow. The adrenaline that is released due to powerful emotions triggers the spasm.

Do e-cigarettes have any effect on Raynaud's?
This is a very important and topical question. Although we do not know exactly what causes Raynaud's, we know that cigarette smoking has an effect on the severity of Raynaud's attacks, probably through nicotine. Therefore, Some e-cigarettes may have the same effect as these also contain nicotine. Nicotine, along with some other chemicals in e-cigarettes may make Raynaud's' worse. This is an area where more research is needed.

Join us for a chat with Raynaud's medical professionals

Your Questions Answered by Specialists

Read the questions and answers from the live chats.