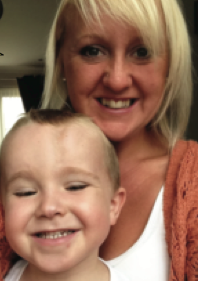 "This is the story of my three year old son, Harrison. In November 2012, little Harrison was finally diagnosed with Linear Morphea.

The next couple of months were a bit of a whirlwind of appointments running between our local hospital and Great Ormond Street Hospital putting Harrison's treatment plan into place.

Since this time Harrison has been on weekly injections of Methotrexate which I administer at home, and has had bursts of high dose steroids. Harrison also has blood tests every 2-6 weeks to monitor his liver function.

Harrison's lesion is on his face and runs from the tip of his nose right up through his hair to his crown. Initially his hair fell out along the lesion, but thankfully this has now grown back. Purely due to people not understanding and not knowing about Scleroderma, we get stopped regularly by people commenting on his forehead, wondering if he has bruised himself or bumped his head, and quite often Harrison becomes conscious and shy about it and chooses to hide away.

In June this year I decided to raise awareness and collect donations to raise this much needed awareness. I am a mobile Beauty Therapist so during my work hours I handed out informative bookmarks, leaflets and posters to all my clients. I also sold wristbands and badges to raise money. My husband and father in law also took collection boxes to work at our local port, they gathered donations, and sold wristbands and badges. Between us we managed to raise £300 which will go towards helping raise awareness and finding a cure for this horrible disease that affects so many.

Through it all, little Harrison has been so brave, and we are so very proud of how he has dealt with everything. We worry about how the disease may progress in the future and what this could mean for Harrison growing up, but with the support of his family (and with his big sister Brooke looking out for him) we hope he will be grow proud of all he has gone through, and he will not let this disease get the better of him. “

An introduction to this challenging condition

How other people live with Raynaud's

Sign-up to receive your monthly Raynaud's and Scleroderma E-News direct to your inbox.