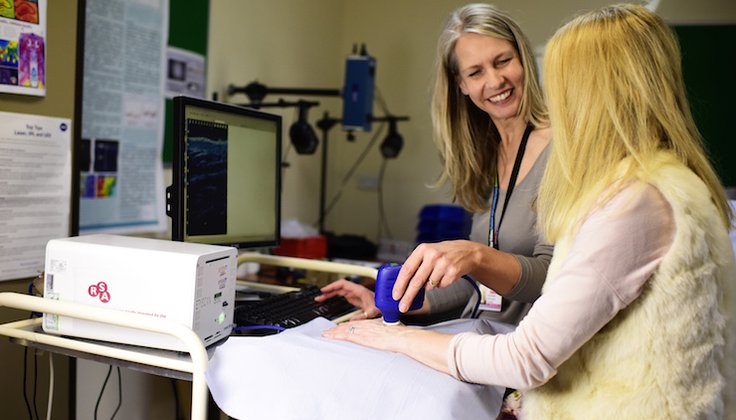 The use of nailfold videocapillaroscopy, a non-invasive imaging technique, can aid in the very early diagnosis of systemic sclerosis according to the results of a large study. Nailfold videocapillaroscopy consists of a combination of a microscope with a large magnification lens coupled with a digital video camera aided by specific software allowing a precise measurement of the forms of capillaries and their density.

The typical pattern of capillaries that occurs in early scleroderma was found in a higher proportion of people with Raynaud's who were positive for antinuclear antibodies (40%) than in those negative for these antibodies (13%). The study, which included 1,085 people from 40 centres, aimed to identify people with early signs of scleroderma and ultimately treat them before irreversible tissue damage has occurred. The results, presented at the recent EULAR meeting, suggested that people who meet the VEDOSS (very early diagnosis of systemic sclerosis) criteria largely have capillaries with the characteristic appearance of early scleroderma.

Nailfold videocapillaroscopy should be regarded as a key component of the VEDOSS criteria, the study concluded. The VEDOSS criteria have been designed to diagnose scleroderma as early as possible and include Raynaud's phenomenon, the presence of antinuclear antibodies in the circulation and swollen fingers. As scleroderma is often preceded by Raynaud's phenomenon, the use of nailfold videocapillaroscopy provides an ideal opportunity to investigate people for the presence of giant capillaries and haemorrhages, which are early signs of damage to the circulation. During June, we joined Francesco Del Galdo's team and tested 603 people in Leeds as part of our first mobile clinic. Capillaroscopy was a vital test carried out to understand whether any visitors were at risk of developing scleroderma.

We are pleased to announce the release of the SRUK Raynaud’s App. SRUK are working in partnership with the University of Leeds on the STRIKE Study which will track 400 people with Raynaud’s. This is a pilot study linked to the research.

Sign-up to receive your monthly Raynaud's and Scleroderma E-News direct to your inbox.