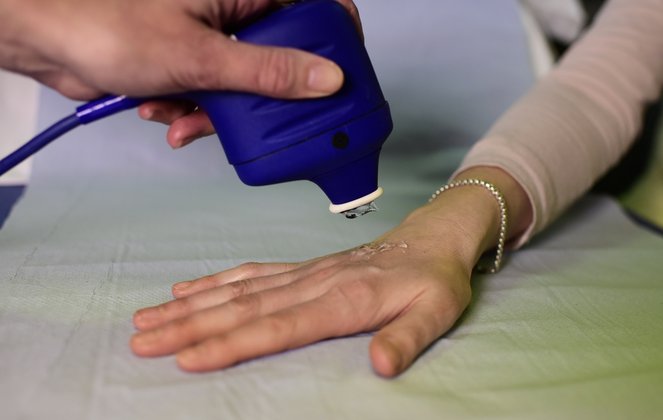 Researchers recently discovered a natural molecule, the M10 peptide, that can significantly decrease fibrosis in a mouse model of scleroderma. The study, “M10, a caspase cleavage product of the hepatocyte growth factor receptor, interacts with Smad2 and demonstrates antifibrotic properties in vitro and in vivo,” was published in the journal Translational Research.

The team, with the Medical University of South Carolina (MUSC), found that the M10 peptide might also help to protect systemic sclerosis patients against fibrotic damage, specifically interstitial lung diseases (ILD), its most severe complication.

“Systemic sclerosis is often more than skin deep, affecting the gastrointestinal tract, the lungs, the heart, the kidneys, and the blood vessels, so it is a model for many other more prevalent fibrotic diseases. Whereas there may be 300,000 Americans with scleroderma/systemic sclerosis, millions of others suffer from fibrosis of these other organ systems,” Richard M. Silver, MD, director of the Division of Rheumatology and Immunology at MUSC and a study co-author, said in a press release.

Previous studies showed that the hepatocyte growth factor receptor known as MET carried important anti-fibrotic characteristics, but the mechanism behind this phenotype remained unclear. Cleavage of MET by natural mechanisms lead to the formation of a ten-amino acid peptide, the M10.

MUSC investigators discovered that M10 effectively decreases collagen and protects against fibrotic injury in a bleomycin-induced model of ILD. The anti-fibrotic activity of M10 was linked to its inhibitory effect on transforming growth factor beta 1 (TGF-β1), a key cytokine involved in inflammation and fibrosis. Researchers also tested M10 activity in a bleomycin murine model of pulmonary fibrosis, leading to a significant reduction in lung inflammation and fibrosis.

“We observed that treatment with M10 by intraperitoneal injection markedly improved bleomycin-induced lung fibrosis in mice, suggesting that the M10 peptide may have potential for use in the treatment of scleroderma-associated interstitial lung disease and other forms of pulmonary fibrosis, for example, idiopathic pulmonary fibrosis,” concluded Galina S. Bogatkevich, MD, PhD, the study's lead author.