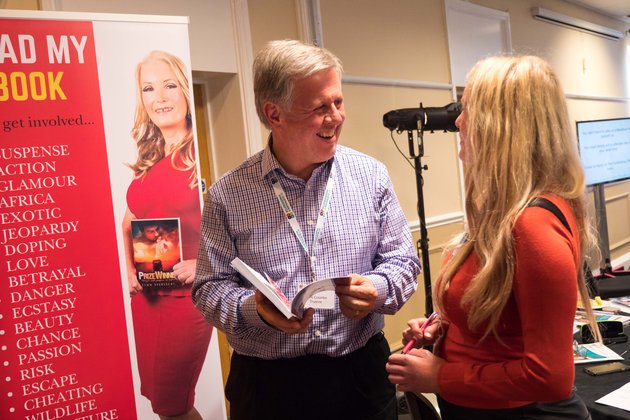 Lynn's Book Signing is on -

We will be joined by Prof. Denton, Prof. Butler and Simon Callow, award winning actor and director.

The book you have in your hands needs no introduction from me: start reading it and you won't stop until the last page. It's a romantic, highly-charged story which sweeps you up into the drama of its hero and heroine; it's touching and funny and sexy and exotic – and paints a very alarming picture of South Africa today. All of that you will see for yourself. So why am I writing these words? Simple: because Lynn asked me to. If you ever meet Lynn, you'll discover pretty quickly that 'No' is not a word that means a lot to her.

In fact, I met her in a hospital, in the famous Charles Wolfson Centre for Reconstructive Surgery at the Royal Free Hospital in North London, of which I am a patron. Everyone said to me: “Oh, you must meet Lynn. What a character.” When I finally did, I was baffled as to why she was there: a very attractive 30-something. What could have brought her here? And then I noticed that, yes, perhaps the skin on her face was a little tight, and then I noticed that her hands were a little rigid. Nothing very obvious. Little did I know what lay behind these mild symptoms.

It transpired that for the last fifteen years she had been suffering from one of the most alarming and unpleasant dermatological conditions in existence: scleroderma, an auto-immune, rheumatic, and chronic disease that affects the body by hardening connective tissue. The surface of the body becomes increasingly rigid – your fingers can't move (which is how Lynn first knew that something was wrong), your lips begin to seize up, opening your eyes becomes increasingly difficult. You are, in effect, trapped inside a body which is closing down, being buried alive with frightening speed and efficiency by your own system. No one really knows what causes it – it might be genetic, but it might not – and only recently has it been possible to arrest the symptoms. Not to cure them: to arrest them. It's a long, slow and exhausting process, both mentally and emotionally – a recipe for despair.

But scleroderma reckoned without Lynn 'Never-say-no' Steblecki. Once she was told what was going on – once she got a name for her condition – she set out to beat it. I realised from the moment we started speaking that this was one feisty dame, fiercely determined. But the miraculous thing was that she saw the funny side of it all. How?

Had even a tenth of what has happened to Lynn happened to me, I would have curled up into a ball and crept away into a corner to die. Not her. She took it on, without hesitation. And laughed at it, spooky old scleroderma. And because of that – because of her refusal to give in, and perhaps even more because of her determination to laugh in its face – she has made astonishing progress. It wasn't so long ago that, because of the hardening of the tissue in her mouth, she actually couldn't laugh. But she was having none of that. Her profound optimism, wherever it comes from, has kept her going. And she laughs like a drain.

She even managed to use her thumbs to type again, despite the inflexibility of her fingers. At that first meeting, she told me that she was planning to write a novel. I asked her to send it to me when she finished it, and now she has. I lazily assumed that it would be a story about what had happened to her. Not a bit of it. It's about the search for love, the strength to believe that one is entitled to love and to be loved. I think that, in the end, is Lynn's secret.

She believes in love, you see: its power and its healing potential. And nothing that has happened to her has dented that belief. It's very inspiring, and a little bit humbling.