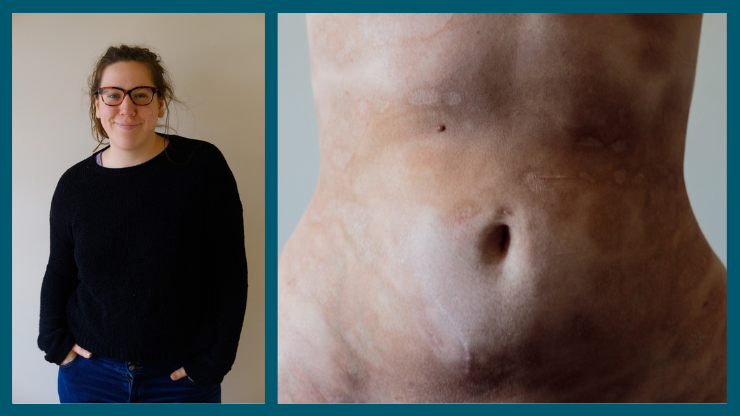 Everything in my life changed when I found a strange bruise on my side, just a few months after a throat infection went septic and hospitalised me. At first, I did not think it was anything to worry about, but I had no idea that I had already said goodbye to my normal life. Over the next ten years, my life would change dramatically and normal would become a distant memory.

One bruise turned into several and I watched in horror as the mysterious lesions spread like wildfire up my rib cage. As an emotional 14-year-old, my mind immediately went to the worst-case scenario and I couldn't stop picturing myself strung up to machines fighting some mysterious illness. While my instincts may have been on the dramatic side, I wasn't far from the truth.

My mum took me to the local GP but an impatient doctor dismissed me. She informed me that I had a rash caused by a belt. As the lesions were nowhere near where a belt would be, I was mystified. As more symptoms popped up, including stiff joints and nerve pain, I hounded my GP surgery for the next six months.

Following a lot of tearful doctor's appointments, a sympathetic GP listened and acknowledged that there might be an underlying problem, especially as I had also developed widespread chronic pain. I was referred to a rheumatologist and a dermatologist. I finally felt like I was one step closer to an answer.

My dermatologist assembled a team of consultants to diagnose me. I was the first case of my kind they'd seen and he had no idea where to start. In a matter of months my life became abnormal and revolved around finding a diagnosis.

Eventually I got one and quickly became accustomed to life as a guinea pig. My consultant's diagnosed me with lichen sclerosis and localised scleroderma. My rheumatologist confirmed that I had hypermobility and years later I was diagnosed with fibromyalgia and irritable bowel syndrome.

But, while I was being treated, my symptoms kept flaring up. I began losing dexterity in my hands and had to use laptops for all my exams. I struggled with developing symptoms and hypersensitive skin. I wrestled with mobility issues and faced daily intense pain and never-ending fatigue.

Although the symptoms were physical, they impacted my mental health too. As a self-conscious teenager, I was horrified by the mess of scars that were constantly changing on the surface of my skin. I hated them and what the condition had done to my life. I endured flare up after flare up, all treated with varying degrees of success, and I got lost in the medical whirlwind of my life.

For the longest time, I obsessed over the loss I felt. I mourned my old life and I refused to embrace my new one. I resisted my condition with every ounce of strength I had and, as a result, began to identify with it too. I defined myself by it and my illness soon encroached on every aspect of my life – mental and physical.

I continued on in this cycle for years before I finally woke up to what I'd been doing. While chronic illness may be infuriating, I couldn't let it take more from me. By surrendering to its power, I'd lost my own.

I changed everything in my life to appease my condition's needs – from my career path to my daily routine – but what was the point of all that if I wasn't enjoying my life? I had to learn how to balance caring for my physical health with every other aspect of my life.

So, I embraced the abnormality of it all and made a conscious effort to acknowledge all the great things too, including my partner, my family, my friends and my career. I accepted my illness but also realised that it is the least interesting thing about me.

Hearing about SRUK's work and joining their Youth Advisory Board opened up my world. I met other young people facing the same difficulties, people who refused to be defined by their condition. Eventually, I saw myself in the same light, as someone worth more than the obscure medical jargon clouding up their life.

I may struggle every day but I am so much more than my illness and I'm excited to see how I will continue to grow in the future. Sickness is a part of me, but that's all it is, a singular part.

Thank you for reading Hannah's story. If you would like to help support others in her position who have been diagnosed with scleroderma, please donate here.