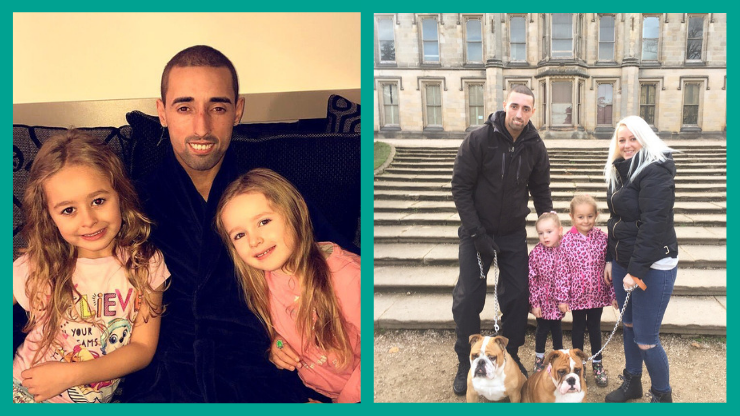 Travis Munn, ex-professional footballer for Mansfield Town and Boston United, shares his experience of systemic scleroderma after his symptoms forced him to give up his sporting career. Now four months on from receiving a stem cell transplant, he is feeling stronger and he is eager to return to his football days. He lives in Derby with his wife Harriet and their two daughters, Freya, five, Bella, three.

Q: What were your first symptoms of the condition?

A: I was playing professional football, I was really fit and in good shape. I could run for hours without a problem and then it all went down hill really quickly. At the end of the season 2015, I was one of the least fit players on the team, whereas at the start of the season, I'd been one of the fittest. My fingers started to go blue, I lost a load of weight and I started stiffening up. Then I got an ulcer on my finger that wouldn't repair but it got worse and worse, and eventually got infected. I had it checked out and was put on antibiotics and thought no more of it, but it still didn't clear up.

Q: Can you tell me about your diagnosis?

A: I went to see my physiotherapist, showed him my blue fingers and he recommended I go to hospital to get checked out. I finally got a rheumatology referral. About a year later, I was told that it was systemic scleroderma. As it was very early stages, I didn't think much of it. But once I started doing my own research, I realised that it was life threatening and there was no cure.

Q: How did you hear about the stem cell transplant?

A: I read up on a stem cell transplant treatment after I saw a piece about a marathon runner who had it and went back to running marathons. I was continually going downhill so I asked my doctors if I could do it. It was inevitable that the condition was going to take over my body, so I knew I needed to get the stem cell transplant before it was too far gone for me to be allowed to have it. At the time, my hospital said no. I was really disheartened. I considered doing fundraising and going over to America to get it done. I emailed the specialist in America who actually put me onto Professor Denton. I went down to see him and they tested me to see if I'd be able to get through the treatment without putting myself in more danger.

Q: When did you have it and what did it involve?

A: I had the treatment between November and December 2018. First, I went in for one day of chemo and then went home for a week. On another day they took the stem cells out of my body. I went home for another week or two and then I was admitted to the transplant ward. I had to be in an isolated clean room to lower the risk of me picking up any infection. I wasn't allowed any visitors who might be sick and everyone had to clean him or herself before coming in. I had chemo for seven days followed by one day of rest and then they put my stem cells back in. Then it was just a matter of resting and having other supplementary treatments, like blood and platelets. Afterwards, my immune system wouldn't come back up to normal levels. I had to have daily injections in my stomach to boost it.

Q: What was the hardest part of the treatment?

A: Saying goodbye to my kids and wife was the hardest part of the treatment. I said goodbye to my family and friends for a month and part of me didn't know if I was even coming back. It took a toll on everyone but I had so much support from friends and family, with around 40 people shaving their heads in solidarity with me for a fundraiser.

It's 100% worth it to though. They said it would take a year for me to repair but I'm already seeing benefits. I'm breathing better and my skin is loosening up. I'm looking to get back into work and potentially back into football. But I don't want to get too excited before I know for sure. I hope I can come back with a vengeance.

Q: Why did you push for the treatment?

A: I wasn't that unwell, my breathing was getting worse, but I couldn't carry on and just let it get worse. It was heartbreaking for my kids to see me that sick. I'd rather go out fighting than not. Waiting was just a risky as the treatment, so it was an easy decision.

Q: How has your outlook changed following the procedure?

A: I don't see scleroderma as a threat anymore. It's still early days but it's definitely ten times better. Everybody that I visit can see it my face, I'm not as gaunt anymore and just everything is better – I can even eat properly. In a nutshell, I just feel better. I'm looking to go on bike rides again with the family and go swimming too. All my friends are fitness fanatics and my whole life has been about football, so going from that life to being sick was really tough. To have a dream like that taken away from you is really tough, but I'm hoping this will change that. It's definitely made me appreciate life.

Q: How did your symptoms affect your football career?

A: I transferred from Mansfield Town FC to Boston United FC and my amazing manager Jason Lee, who is still a great friend, supported me a lot. I let him know what was happening and he understood how I was feeling. It was hard to take and it upset me a lot, especially as I didn't know what it was at the time. All I'd wanted to do was make my family proud, but that changed because of scleroderma. By the end of the season, I was so unfit and unhealthy. I had to put my career on hold but my old managers have stayed in close contact.

Q: Are you still hopeful that you could return to playing football?

A: I am hoping that I'll be able to go back to it eventually. My doctor has said we'll do a round of tests at the end of the year to see where I stand. With how I feel now, I think I could. If someone kicked a football in front of me right now, I'd go after it. My long-term goal is to go back to football. The little boy in me still wants to go back to it and chase that dream.

Q: What advice would you give other people seeking the same treatment?